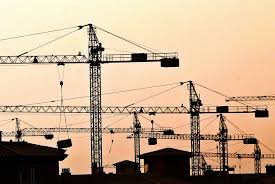 I mean property sales and their prices.

The house could not be less ….

The prices of them increased a lot in the last year in …. 8 cities in Spain!

In others they went down …

Many people think that we are facing another puncture of the real estate bubble.

because the circumstances today are very different from those of 2008, which was when it burst everything.

For me there will simply be an “adjustment” of the real estate market but not a “prick” like the previous time.

According to Funcas (Private Teaching Foundation for Economic and Social Studies and Research) the price of housing will rise 2.5% in 2020 and will remain flat in 2021

In Economics Information Notebook Nº 273 (Funcas), they analyze the real estate sector and its financing, in a framework of economic slowdown, and remind us that the real estate bubble and the financial risk associated with mortgage loans became the main trigger of the crisis.

The article by Carlos Ocaña Pérez de Tudela and Raymond Torres points out that the imbalances that led us to the previous crisis are not perceived, so, after several years of recovery, there will simply be adjustments due to the lower amount of purchase and sale operations.

Both prices and the number of sales would moderate in the coming years, without falling significantly, except in those places where there has been an overvaluation.

This trend would not affect the economy or bank balances much.

For the authors, the situation is not comparable to that of 10 years ago because prices are almost 20% lower than the maximum pre-crisis; always depending on the area we talk about, the

Household effort to repay mortgages and pay interest is close to 33% of disposable income, well below 2008, when it exceeded 50%;

And above all, most importantly, there is no mortgage credit bubble.

For you to understand quickly, the banks are not releasing the money as easily as at that time.

Do you remember it?

How easy did they give us the “twine”?

You went to the bank to ask for a loan for a car and you went out signing a loan to buy a new house.

And with a new suit

There is no overvaluation or risk of default due to the low granting of mortgage loans.

Now to be given a credit in addition to being a “Saint” and not having a traffic ticket, you must have demonstrable and secure income to pay for two houses like the one you want to buy.

A very important factor also to take into account, is the reduction of household and business indebtedness, with a drop of more than 72 GDP points since 2010.

I don’t know if this is because we have become more logic and realistic,

or because we have been so upset that we no longer buy on a credit, or simply because of what I mentioned earlier, that most of us are not given a credit even if we catch the bank manager a little drunk …

On the other hand, the investment in construction that before the crisis came to exceed 20% of GDP, has fallen by half.

If you look at the side of the fearful, it’s good.

If you look at it on the side of job creation and wealth creation, it’s bad.

And employment in the sector has gone from 11.8% of total employment to 6.3%, a value close to the European average.

How much money was moving at that time …..

It is said soon …

Today, the largest price increases occur in 10 provinces: the large capitals, including Barcelona, ​​Madrid and Seville, and tourist areas such as Castellón, Mallorca, Málaga, Tenerife and Valencia, as well as Navarra and Valladolid

On the contrary, 10 provinces (compared to none during the bubble) still register price falls and many others do not experience significant changes.

The article does warn of a certain bubble in the rent, because there is more demand due to two factors mainly: for the tightening in the conditions to grant mortgage credit that I mentioned before and because there are many job changes due to the precariousness and change of places of residence

And most importantly, both the weight of construction in the economy and real estate prices follow a moderate upward trend.

Therefore friends, while it is true that there is now a certain break due to uncertainty, have you thought about what to do with the money you have left over?

If the banks are already going to charge you for having it,

so quickly look for some interesting property to buy and put it on rent, which at least you will get 4%.

Who will give you that?

You do not believe me?

Well, read the article by Rocío Ruiz on EXPANSION

And because I’m very smart, I can advise you where to buy and what, and I guarantee that you will get much more than that.

So you know, bring your savings to the Mediterranean, and earn Money Money

A hug and good weekend